Hello, The key blanks fitt perfect, thanks for the service. Good by, Volker

A key from a key manufacturer and not from a vehicle manufacturer. It is also called a replacement key or non-original key.

A cut in the blade of the key. With a traditional key for each bit the depth and the distance to the shoulder is specified. These specifications are recorded in a bitting chart.

The bow is the wide part of the key, where it is held.

Making incisions (bits) in a key blank. When an already cut key is used then we speak of "key duplication". It is also possible to get a working key by cutting it to a key code. 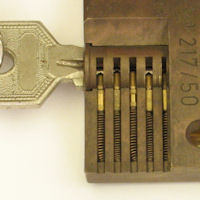 A cylinder lock is a lock with a cylindrical plug containing the keyhole. The plug rotates when the lock is opened. In a lock without a key, the pins prevent the plug from being rotated. The key pushes the pins into the shell, releasing the plug.

A key blank is a key without incisions. A key blank needs to be cut before it can be used. Each blank has its own unique key blank number. 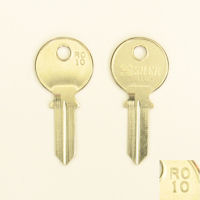 The key code is a code from the lock manufacturer and specifies which key will open the lock. The key code specifies both the blank to use and how to cut it. The key code consists of numbers and letters or just numbers.

To understand the key code is good to understand how a lock is manufactured. A final step in the production process is placing the pins or wafers. The lengths of these pins/wafers determine how deep the key should be cut. These lengths contribute to the key code.

The keyblade is part of the key that is inserted into the keyhole.

Locks are keyed alike if they can be opened with one and the same key. The locks have the same keyhole and are coded identically.

The plug is the cylindrical part of a cylinderlock, containing the keyhole. Using the right key makes it possible to rotate the plug in the shell.

Recoding modifies the lock, such that it can only be opened with a key that is cut differently. The old key no longer works. Recoding does not change which key blank is needed.

The remote control is an electrical circuit in the keyhead which allows you to open the car doors remotely. It is fully independent from the transponder chip that if often also present in the head of modern keys.

The shell is the lock's non-moving housing that contains the plug.

The shoulder is the extrusion on the blade of the key. The shoulder ensures that the key is inserted into the keyhole to the correct depth.

The tip is the part of the key that is inserted into the keyhole first. 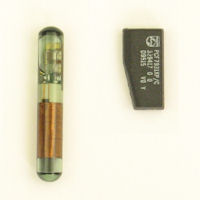 The ignition lock and the antenna are independent and separate parts.